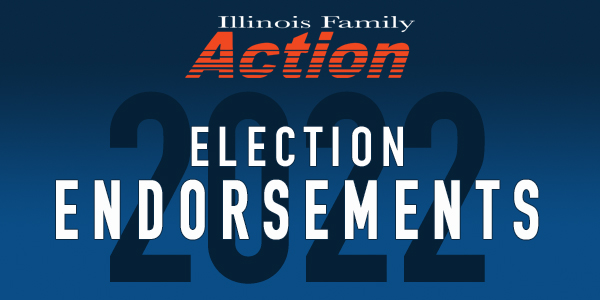 Early voting for the June 28th Primary Election begins on May 19th. We hope and pray that Christian voters in Illinois will come out in droves to cast their ballots in support of pro-life, pro-family candidates. Prior to going to the polls, make sure you know where your candidates stand on issues important to people of faith by checking out IFI’s voting resources, which includes the Voter Guide.

Illinois Family Action is today announcing its list of “endorsed” candidates. At the top of the ticket is the Republican primary for U.S. Senate. We are delighted to endorse Kathy Salvi, a strong advocate for the sanctity of life, and a strong defender of religious liberty.

In November, the Republican nominee will face Democrat incumbent Tammy Duckworth. She must go. She has been a federal government employee for sixteen interminable years, and Illinois now ranks at the bottom of the barrel of states on virtually every measure. Duckworth is so extreme that she voted nay to the Born-Alive Abortion Survivors Protection Act in 2019.

This legislative proposal would have required, in “the case of an attempted abortion that results in a child born alive, any health care practitioner present at the time the child is born alive shall exercise the same degree of professional skill, care, and diligence to preserve the life and health of the child as a reasonably diligent and conscientious health care practitioner would render to any other child born alive at the same gestational age.”

How can any reasonable person oppose medical care for babies who survive abortion?

A key race for the U.S. House of Representatives features businessman James Marter who is trying to break out of a crowded race in the 14th District and has been endorsed by former Congresswoman Michele Bachmann. Likewise, we are thrilled to endorse Illinois’ only Freedom Caucus member Mary Miller, who is running for the 15th District. It is important to note that Miller has secured the endorsement of former president Donald Trump, the National Rifle Association, Freedom Works, and Family Research Council Action to name a few.

Darren Bailey has received our hearty endorsement for the race of governor. Not once did he succumb to peer pressure, insults, or mockery, common tactics of the bipartisan combine, while serving in both the state house and senate. He has been a valiant voice for pro-life, pro-family issues. Bailey is a committed Christian who seeks to put Christ before and in everything he does. His faith is what makes him a conservative.

Bailey unabashedly believes in the sanctity of human life. He has steadily fought against the egregious, anti-life legislation in both chambers of the Illinois General Assembly, and IFA does not doubt that he will be the best advocate for pre-born human beings that the office of governor of Illinois has ever seen.

In the Illinois House District 75, we are elated to endorse Jed Davis, a courageous man of faith and Christian school board member. Also noteworthy is former State Representative John Cabello‘s decision to run for the newly drawn 90th House District. Both of these candidates have proven to be bold pro-family voices on key family and social issues.

This primary election is critical for the direction of pro-family issues in Illinois. We support these candidates because they have articulated a personal commitment, or have a proven public-voting record on pro-family bedrock principles.

Please vote in the primary, and urge friends, neighbors, and family members to do likewise. We have been blessed with the privilege of self-government. Don’t squander it.

Illinois must get rid of lawmakers like Tammy Duckworth and JB Pritzker who heartily endorse human slaughter, the sexual integration of private spaces, and economic policies that gouge taxpayers and have resulted in a mass exodus from Illinois, which, in turn, further burdens the remaining Illinoisans.

We look forward to working with these candidates to advance pro-family policies once they are in office. Below is a comprehensive list of our picks:

Governor and Lt. Governor of Illinois:

The following candidates fell short of earning an IFA endorsement in this election cycle, however, the board of directors have decided to recommend them to voters in these districts:

Note: We did not endorse uncontested candidates, therefore, this endorsement list will change for the November 8th General Election.

For more information, check out the IFI’s Voter Resources before you vote!