This article was first published on the Illinois Family Action website at this link.

===
It is important to understand that Mark represents adults coming to the table to solve our problems.

“We have had enough of soundbites and social media.

“It’s time to get some work done.

“Mark is the man to make that happen as he will work tirelessly for you.”
===

The representation of “adults” among the 6 Republicans competing for the honor to face U.S. Congressman Bill Foster (D-Naperville) this fall was a timely metaphor, given the age of the candidates running:

Currently and in this ranking order, Lauf, Evans and Carroll are the three candidates with a realistic chance to win the Republican primary, which was not lost upon Keicher’s description of having enough of “social media” in subtle reference to Lauf.

The maturity of Lauf, which was covered in my previous article at IFA about Lauf, played itself out on May 17, immediately following the IFA reception featuring state Senator Darren Bailey (R-Xenia), endorsed for governor, and the three IFA endorsed suburban Republicans in congressional districts rated as “competitive” by the major ratings services, including Carroll in IL-11:

Immediately after the May 17 afternoon IFA reception in Glen Ellyn, Carroll went to the Lemont Township Republican organization’s reception in Lemont.

The northern 3rd of Lemont Township is the only portion of Cook County in the redrawn IL-11, and the Lemont Township Republicans under the leadership of Township Committeeperson Michael Shackel had advertised the reception in the local media. 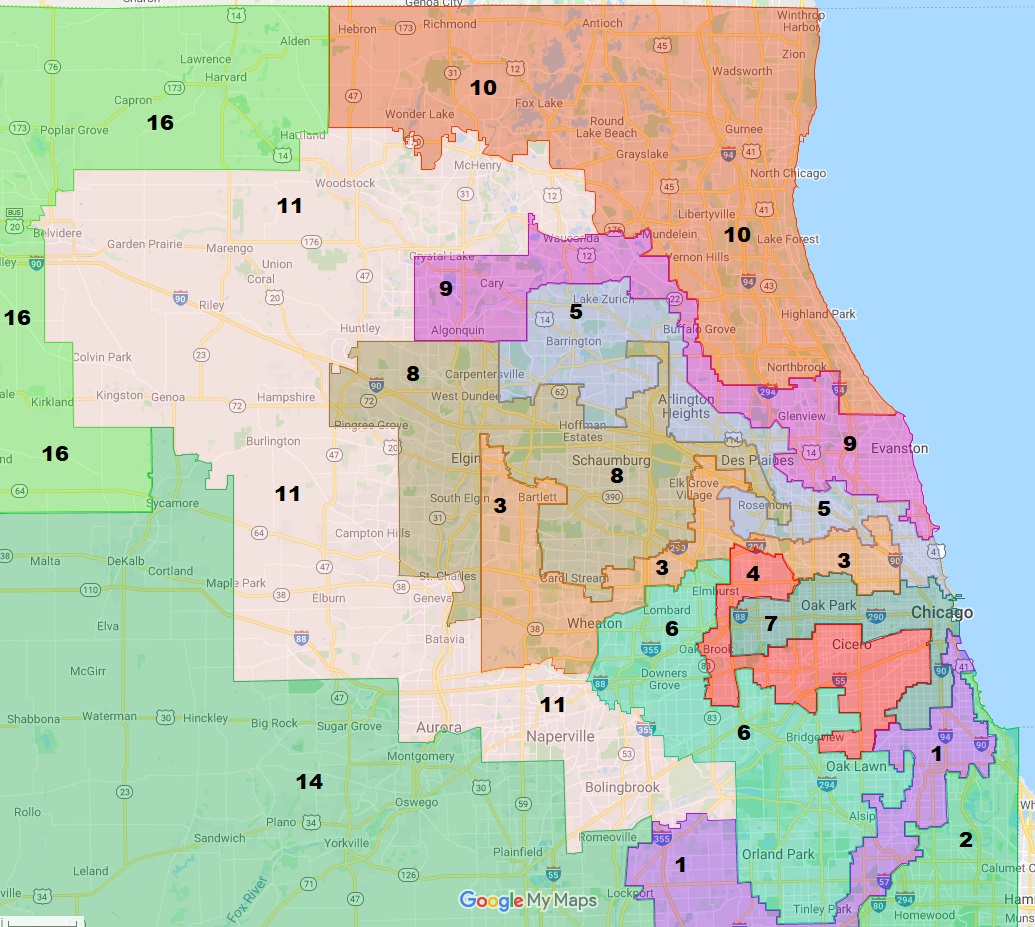 Three of the six Republican candidates appeared in Lemont, and multiple sources have given me this interaction between Carroll and the nominal frontrunner Lauf:

===
“Catalina Lauf finally met Mark Carroll. 42 days until the primary and she finally meet face-to-face in Lemont of all places.

“About 30 minutes after the Lemont Township Republicans meet and greet started, Lauf walked in late and started shaking hands like she had met everybody in that room prior to Tuesday night.

“Lauf approached Carroll and shook his hand as if he were a constituent and not a fellow Republican candidate!

“Lauf had no clue who he was (and Carroll did not tell her) until he was about to leave, and a gentleman flagged him down to speak directly to Carroll in front of Lauf and instead of talking with her.

“The gentleman asked Lauf if she knew Carroll, to which Carroll responded during Lauf’s elongated pause, ‘That’s my opponent!’

“Lauf then told the guys that she’d let them talk and tried to get away from the event.

“Not before she was caught to take a photo the Lemont Republicans wanted to use to promote all Republican candidates.”

The picture with Evans, Lauf and Carroll was taken with Committeeperson Shackel and is displayed at the top of this article. According to sources, Lauf stayed at the Lemont event for only 10 minutes total.

Returning to state Representative Keicher’s allusion to Lauf with his “adults” comment while endorsing Carroll, ever since Lauf’s emergence as a competitive candidate in late 2019 for the 2020 Republican primary in IL-14, voters questioned Lauf’s lack of “life experiences” given when she first ran at age 26, she had only six years of post-college adult life (Lauf graduated from Miami of Ohio at age 20 at the end of 2013).

As covered in my previous article last week, Lauf’s political resume’ begins with her nearly 10 months working for the reelection campaign for then-Governor Bruce Rauner. Lauf constantly omits her Rauner reelection campaign employment even to the extent of not identifying it on her LinkedIn online resume’, and falsely claims at many of her interviews and at events her first political job was working for the United States Commerce Department during the Trump Administration.

During her eight months with the Commerce Department, from December of 2018 through July of 2019, Lauf was recruited by Jeff Roe’s Axiom Strategies, which was recruiting young, attractive Millennial women to run for Congress in 2020 in order to flip the House after the Democratic takeover in the 2018 elections.

Lauf had none of the life experiences cited above, and only one Millennial woman, Republican Laura Loomer who won the Florida primary in FL-21, had neither served in the military, had never been married and had not had children while winning a primary.

When the 2020 General Election had come and gone, only three Republican Millennial women were first elected to Congress to be in the freshmen class sworn-in on January 3, 2021:

The only Republican woman first elected to Congress in 2020 who had not served in the military, never married and no kids was Congresswoman Nicole Malliotokis (R, NY-11), but she missed being a Millennial by less than two months (born in November 1980), and her service in government went back 25 years including serving in Governor George Pataki’s administration, and 10 years in the New York State Assembly, including a loss in the 2017 New York City mayoral general election to Bill de Blasio.

Compared to these women, Lauf, at age 27 in November of 2020, life experiences are thin.

It should be noted, I am using the Pew Rersearch Center’s definition of a Millennial, with birth year starting in 1981 and through end of 1996.

Lauf’s Call for Younger People in Congress Smacks of Ageism

In multiple interviews, public appearances and social media posts, Lauf has called for her election because Congress needs younger people to counter the left’s Millennial members of Congress, in particular the initial members of the leftist Squad first elected in 2018:

Lauf, last fall, even hinted youth was needed in Congress in order to understand the latest trends, like investments in cryptocurrencies since there is pending legislation in Congress to regulate cryptocurrency.

The truth, to really know/understand cryptocurrency, one must actually own and invest in cryptycurrency. Lauf, just like life experiences cited above, has no record of ever investing in cryptocurrency since 2018. How does one know this? In an article to be published during the first week of June, I will introduce Illinois Family Action readers to the Financial Disclosure statements all candidates for Congress are required to file under the Ethics in Government Act of 1978, as amended.

Candidates for Congress must disclose their assets, including all investments, their value and any income from investments. Since Lauf first ran for Congress in the 2020 election cycle, her statements go back to 2018 with financial activity, and there is no record of Lauf owning cryptocurrency, though because of her 29-year-old youth, she believes she’s better qualified then her Republican primary opponents to challenge Foster in the fall.

During the week before Memorial Day, IL-11 Republican candidates Mark Carroll and Jerry Evans, continued to announce endorsements, each being endorsed by Republican state central committeepersons:

During May, Lauf has been endorsed by two Millennial Republican members of the U.S. House:

To date, Lauf has not endorsed, or financially helped, any Illinois-based candidate.

Just like the true story about not recognizing her opponent Carroll at Lemont Township on May 17, Lauf’s lack of living life among Illinoisans is simply more life experiences she has yet to live, and continues to be the most significant reason she’s not yet ready to serve in the United States Congress.

Living life among the very constituents you want to serve is the safest guard a member of Congress will not become a part of the “uniparty” or “swamp” many believe all politicians inside-the-beltway are living.

Lauf, without the appreciation and hard work it takes to build a successful business, one that employs people from your district or state, let alone owning any property in her own name, will make Lauf most-likely to become a member of the DC swamp, should she win election.

Given Lauf’s age of 29, draining the swamp does not mean replacing it with swamp water of a younger vintage, so going into the final month of campaigning among Republican priomary voters in the 11th Congressional District, it is more imperative to apply discernment with the resources available to nominate the best Republican candidate to face Congressman Foster in the fall to hopefully flip the seat.

More resources will be discussed in future articles in the next two weeks.

John Lopez has written about policy and elections through the McHenry County Blog since 2019. He is now semi-retired, and does freelance work with analytics, as well as political candidates, emphasizing policy as the means to advance the conservative message, by engaging through policy “dog fighting”, applying discernment for winning and advancing God’s Kingdom agenda.

John’s known for getting past the talking points, the narratives, the abstracts, the platitudes and the bromides in order to discuss policy and apply Scripture to overcome unholy divisions in the local community, our state, and nation. John has been married for over 17 years.